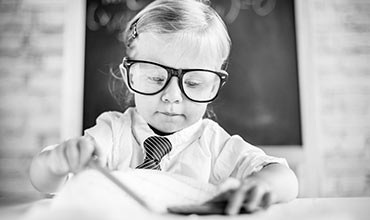 Whereas there are many studies that are important, we will list just a few that will convey the importance of optimal early education.

In 1994, the Carnegie Corporation of New York released a seminal report titled Starting Points: Meeting the Needs of Our Youngest Children.  This report addressed many societal issues but also concluded that children in the United States under the age of three years were not getting enough cognitive stimulation and were arriving in kindergarten unprepared.  Whereas this report was directed more towards disadvantaged children, the general principle applies to all children.  The degree and depth of early education varies tremendously in the early education/childcare industry and thus many, if not the majority of, children from upper socioeconomic standing are also not receiving optimal early education.  We define optimal early education as that which provides the maximal amount of cognitive stimulation (Mathematics, English, etc.) while developing self-regulatory habits (please see Why Boring Task are Important on our Blog page).  Even at some of the most expensive early education centers, there is suboptimal cognitive stimulation.

About two years after this report was published, the Families and Work Institute, in conjunction with the Carnegie Corporation, the Harris Foundation, and others, held a conference titled Brain Development of Young Children: New Frontiers for Research, Policy, and Practice.  This conference brought together 150 neuroscientists and researchers to determine whether findings from the field of neuroscience supported the conclusions of the Carnegie Corporation discussed above.  In a word, yes, they did.  These findings and the discussion are included in the book by Aamodt and Wang (see References below).

Another study, The Perry Preschool Study, also demonstrated the importance of early education during the sensitive period of brain development (please see The Brain – Time Sensitive Material! on our blog page for more on the Sensitive Period).  The Perry study is also discussed in a different context in the blog titled Why Are Boring Tasks Important.  Briefly, in the mid-1960s, the researchers signed up three- and four-year-old children to be in either a high-quality preschool (experimental group) or no preschool at all (control group).  These children were tracked, not for

one year or three years or five years but almost forty years (hence the most famous study).   Those children are now in their forties.  This study demonstrated two things.  First, that children in the preschool program did better than those in the control group on cognitive abilities such as IQ test – but only for three years or thereabouts.  Once they were out of preschool, they fell back to the same level as the control group.  However, and second, the children in the preschool nevertheless did much better in life than those in the control group.  The preschool children were more likely to graduate from high school, more likely to be employed at age twenty-seven, more likely to be earning more than the control group, less likely to be arrested, and less likely to have spent time on welfare.  These were significant results and the conclusion was, after much data analysis, that the self-regulation (ability to persist at boring tasks, delay gratification, follow through on plans, etc.) that these children learnt while in preschool was instrumental to their success.

There are many theories of education, teaching, and learning and sometimes it is hard for parents to determine what is good for their child and what is only the latest fad.  One way to ferret out substance from hoopla is to determine if it makes sense and whether someone is trying to persuade you to violate some fundamental and universal principle (please see How to Evaluate Studies in Early Education on our blog page).  From that perspective, parents can remain confident they are doing the right thing by providing their children early and optimal brain stimulation during the sensitive period – including a healthy dose of Mathematics, English, and exercises that teach self-regulation.

These children were tracked, not for one year or three years or five years but almost forty years.