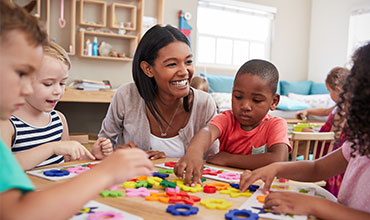 It will come as no surprise to parents that child care can be expensive – and in some states and cities excessively so.  There are multiple reasons for this high cost, such as regulations regarding ratios of teacher to students (these are certainly necessary), inexperienced management (since most centers are run by individuals/families), lack of intelligent software that could help make operations more efficient, and, perhaps the most important contributor, need for continuous and intense efforts relating to staff recruitment/retention and turnover.

The latter has become an especially important contributor over the last few years as the economy has been strong and competition for employees in all industries is fierce – and child care is no exception.  Just as an example, it can cost up to $900/month to post one effective job opening on Indeed.com.  This is quite high, but when combined with the effects of a 30-50% turnover rate (nationally), the need to hire extra teachers to cover for those who are chronically absent (call outs, sick, family emergencies, etc.), and the intangible costs of staff recruitment/retention and turnover, the total cost is immense.  These costs have been rising for the last few years because competition for teachers and aides is fierce and is getting more intense as the economy continues to hold its own.

However, there is more to come.  There are efforts in many states, including Maryland and Virginia (our immediate area), to increase the minimum wage to $15/hour.  Certainly, caregivers for infants and children deserve the raise but part of this cost will have to be shouldered by the parents.  There is the argument that the minimum wage will not increase to $15 until several years into the future (the exact number of years varies by state and city).  However, the practical effect has been quite immediate because of the strong economy and competition for employees - Target has increased their minimum wage to $15/hour ( https://www.cnbc.com/2019/04/04/target-raises-its-minimum-wage-to-13-an-hour-aims-for-15-by-2020.html ) and Bank of America just announced that they will increase their minimum wage to $20/hour ( https://www.cnbc.com/2019/04/09/bank-of-america-is-raising-its-minimum-wage-for-employees-to-20-an-hour.html ).  These anticipatory increases by companies is most likely because of the current fierce competition for employees across all sectors.  The effect of these recent raises will certainly ripple across all sectors and has already begun to affect childcare.  What’s more, this effect will almost certainly intensify over the next two years. After all, if someone can make $15-20/hour, why would they work for $12 or $13/hour?

Current tuition rates for good, educational childcare, say for an infant, range between $400-500/week in the Maryland-DC-Virginia area.  If teachers at child care centers get a raise to $15/hour, that would be an increase of about 20-30%, depending on what their current salary might be.  If this is translated to tuition increases, the current $400-500/week tuition rate could increase to $480-$600/week.

Good and affordable childcare is critical for parents to be able to work.  Unfortunately, at this time, it seems that the cost of childcare will be going up over the next few months and years.  On the bright side, though, parents who are working will hopefully also be getting a raise.

Good and affordable childcare is critical for parents to be able to work.